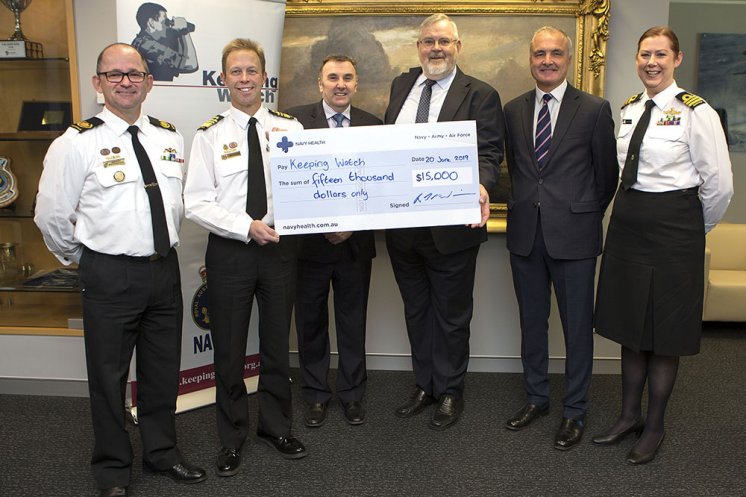 Royal Australian Navy members in need have been given a boost with a donation of $15,000 to the Keeping Watch Navy benevolent fund.

The donation by Navy Health was gratefully received by the Chief of Navy, Vice Admiral Michael Noonan, and Warrant Officer of the Navy, Warrant Officer Gary Wight, who says the money will be put to good use.

"Keeping Watch is increasingly being used by our people who run into unexpected difficulty. It's very encouraging to see organisations such as Navy Health step up to help our people in this way," Warrant Officer Wight said.

Keeping Watch was established by the Trustees of the RAN Relief Trust Fund in 2013 as an additional mechanism through which the Trustees could provide for the comfort, recreation or welfare of a person who is currently a member of the Royal Australian Navy, whether permanent or reserve.

Deputy Chair of Keeping Watch, Commander Christina Ween said that money handed out was paid as a gift to successful recipients.

"The RAN Relief Trust Fund which runs Keeping Watch is regularly called upon to help our people. We've funded everything from medical expenses for life threatening illnesses, to emergency welfare for members and their families escaping domestic abuse," Commander Ween said.

While sailors and their families make up the bulk of Keeping Watch recipients, the fund is available to members of every rank.

"Keeping Watch provides such an important service, and donations shouldn't be limited to the business community," Warrant  Officer Wight said. "There are many worthy organisations out there, but I would like to see more ships consider making Keeping Watch their official charity - I can think of no better cause," he said.